Change management from the bottom up

Ready or Not, Here It Comes

Keeping up in today’s world is a full-time job in and of itself. McKinsey Global Institute executives estimate that, compared with the Industrial Revolution, our world is changing 10 times faster and at 300 times the scale.

Digitization—the widespread acceleration of technology across the globe—is one of the major factors in this unprecedented change. According to a Harvard Business Review report:

“Digitization is impacting every aspect of business, radically changing the ways in which companies grow and compete. The speed and scale at which technological breakthroughs are emerging have no historical precedent and have created an imperative for businesses across industries to respond rapidly with their own digital transformations in order to drive growth and create competitive advantage.”

To stay current and profitable, your business needs to undergo a widespread “digital transformation.” But how do you do that effectively when 70% of change initiatives fail?

Change the Way You Change

In a perfect world, employees would be open to transforming the way they work—without constant urging from management.

Consider this case study: two U.S. hospitals were given grants to implement a change in their basic healthcare approach, moving from reactive care to preventative care. During a 2-year study of the hospitals’ change adoptions, one saw an adoption rate of 64%, while the other didn’t progress much beyond 6%.

What made the difference?

While doctors at both hospitals initially had some reservations, it all came down to the medical assistants (MAs). Managers of the more successful teams gave MAs tools that prompted them to review patients’ preventative care. MAs also began to ask doctors to change procedures as a personal favor, rather than in response to a managerial policy.

Although the MAs didn’t have any organizational authority over the doctors, the doctors relied on the MAs in much of their daily work and were therefore more open to their suggestions. In the end, the MAs were vital in helping change the doctors’ behavior and adopting the new practices. 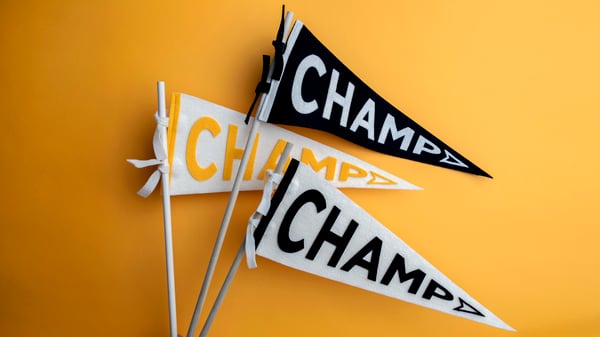 Champions to the Rescue

The same principle applies to a digitalization initiative: a number of well-placed individuals can be the key to widespread adoption throughout the organization. That’s the whole idea behind software adoption champions.

Champions are the innovators, the early adopters who jump into using new tech and are influential in encouraging others to do the same. They aren’t necessarily managers or team leads or IT professionals—they’re just helpful people who are trusted by their coworkers.

Champions naturally exist in a company, but by organizing them into a formal program, you harness their grassroots influence to promote organic change for 10 times the adoptive power.

One of those workplace leaders said, “[Champions] use the technologies and demonstrate new behaviors and, as a result, others adopt tools and adapt their work behaviors. We’ve seen a huge lift in adoption of modern workplace tools as a result.”

That’s What Champions Do

I. Champions change the company culture.

When people have a workplace question, it’s helpful if they turn to their colleagues first—instead of running to the project team every time they encounter a hiccup. Their teammates get the context of the question and are well-placed to demonstrate a solution.

When you identify and spotlight champions, employees know who to turn to when they run into a question. With this setup, everybody wins: IT gets fewer help desk tickets, and users get more relevant answers.

And when champions share their knowledge, they empower other employees to help their colleagues, thereby building more champions! This kind of organic knowledge-sharing promotes a culture of collaboration, learning, and self-support.

As mentioned earlier, employee resistance is one of the biggest challenges to organizational change. Champions’ real power is their ability to break down resistance from the front lines and magnify adoption efforts.

It’s the same idea behind word-of-mouth marketing. According to McKinsey, word of mouth is the driving force behind 20 to 50% of all purchasing decisions—because people trust their friends and neighbors. Likewise, when employees see their colleagues adopting and championing change, they’re more likely to do the same.

Plus, champions are super-effective messengers. It’s one thing to get a company-wide email from the project team about new procedures or policies; it’s another thing to hear it from a teammate who’s tried it themselves.

Champions are basically on-site correspondents. They can give the project team on-the-ground feedback about the adoption process: what’s going well, challenges they’re encountering, suggestions for improvements. The project team can then fill in the gaps and make adjustments as needed to move the change adoption along. 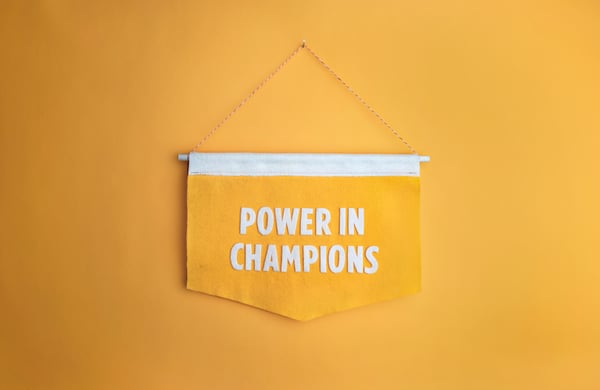 Want to inspire grassroots change adoption in your own company? You’re in luck—here at BrainStorm, change is kind of our thing.

We don’t mean to brag, but our QuickHelp platform is the way to build a scalable, sustainable champions program with less effort on your part. (It’s not bragging if it’s true, right?)

Plus, QuickHelp can help everyone in your organization change, not just the champions.

Ready to get started? Chat with one of our change experts, check out this step-by-step guide to building a champions program for your organization, or click here to learn how to keep your champions happy and your program running smoothly.