You use a mountain of software applications at work. But you probably still ask, “Really? Shouldn’t there be an app for that?”

Truth is, even the best apps can’t possibly meet every organizational need. And if your dev team is short-staffed (or non-existent), nobody is going to make a customized app for you.

Luckily, Microsoft PowerApps can help change all that.

First, a word about citizen developers.

Basically, citizen developers are motivated to build their own applications and rev up business operations in the process. But they usually aren’t developers by profession.

Full-time developers and IT professionals sometimes worry that the rise of citizen developers means the rise in Frankenstein apps. (We think those fears are overblown—but more on that later).

PowerApps is just one of three tools in Microsoft’s Power Platform (the others being Power BI and Microsoft Flow). All three are central to the task at hand. 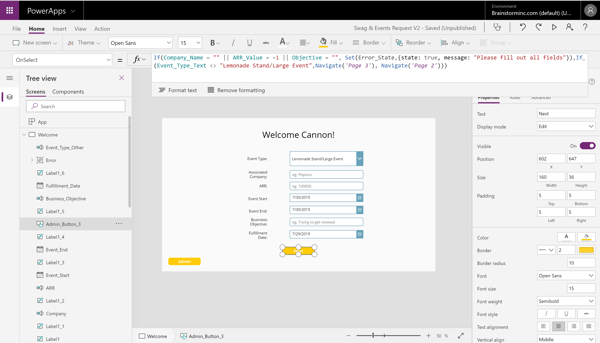 Struggling with Microsoft adoption? Get started with QuickHelp.

Why is PowerApps a Game Changer?

Every day new technologies emerge—and with them, new skillsets. Yet, too many organizations are poorly equipped for these disruptions.

It’s not only the executives who are feeling the strain. IT and development teams also scramble to keep up with the demand for customized software applications.

What’s more, as teams increasingly need to digitize their processes, many rely on consumer products to do so. But this strategy comes with its own set of problems.

As Enflux COO Jacek Materna puts it, “Since a large majority of consumer products are not supported by IT organizations, many teams have developed their own mechanisms for implementing and supporting those consumer solutions.”

Here’s where PowerApps enters the picture.

According to Microsoft, PowerApps allows the CIO and his team some control over how employees leverage their tools. (That means fewer Frankenstein apps).

Nigel Fenwick of Forrester adds, “PowerApps may help the tech app team themselves to quickly deliver MVP apps to employees. So, there is a great deal of potential upside for Microsoft customers if PowerApps governance is managed well from the outset.”

If your organization uses Office 365, you probably already know about Microsoft PowerApps. But a quick review never hurts.

What Does PowerApps do?

According to Microsoft, “PowerApps is a service for building and using custom business apps that connect to your data and work across the web and mobile—without the time and expense of custom software development.”

Custom business apps without the time and expense of custom development? Sounds like a game changer to us.

Both business professionals and power users can be categorized as citizen developers. 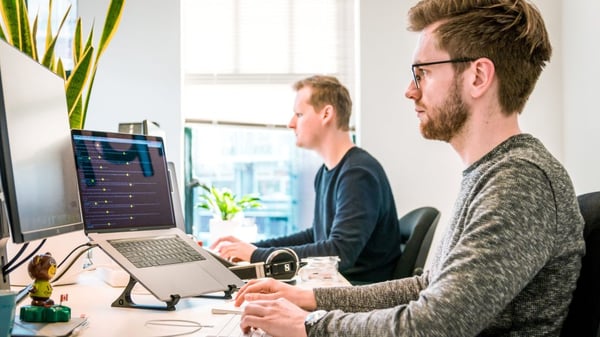 According to Michael Allen, VP of APM for Dynatrace,

“One-third of citizen developers can complete an app in a month or less. (These go-getters) are most valuable in organizations that are either too small to have a tool-creation partition within IT or too large to care about these non-critical projects.”

Put another way, citizen developers want a solution that helps them do their jobs better. For many, PowerApps helps them do just that.

On average, organizations may see three percent of citizen developers with ‘low code’ skills while ten percent have no coding skills. No surprise: when both groups receive organizational support, these percentages rise.

What Do Citizen Developers Create?

Citizen developers clearly see a need and try to fill it. However, they also thrive on creating a culture of innovation in the workplace.

And of course, solving a problem just plain feels good.

So, what are the most common app categories created by citizen developers? Here’s how Outsystems breaks it down: 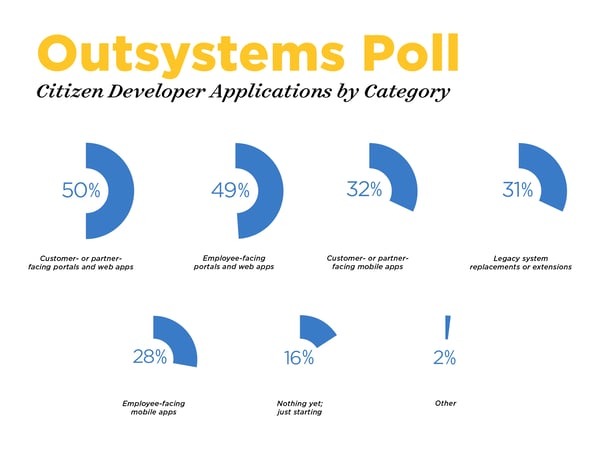 According to additional studies, administrative apps for analysis and reporting are most popular at 46%.

What Does It Take to Make an App?

Earlier, we mentioned ‘no code’ and ‘low code’ tools. Here’s what those terms mean:

PowerApps will feel like a no-code experience to users who thrive in Excel, since Excel and PowerApps use similar expressions.

But for non-Excel users, PowerApps will be a low-code experience that requires some stretching.

Let’s say creating a portal is the goal. If so, the developer will probably head to OneDrive, SharePoint, Power BI, or another tool to gather needed data. Microsoft Flow will automate the processes required for the app to work properly.

Multiple Office 365 tools can factor into the process. But everything starts with PowerApps. 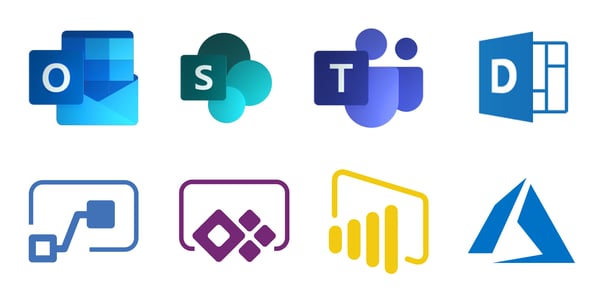 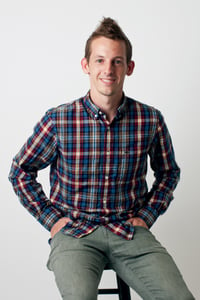 By trade, Bryant is a trained mechanical engineer, a change-enablement professional, and a natural problem solver.

He’s also the perfect example of a citizen developer.

From Idea to Invention

Since joining the BrainStorm team, Bryant has seen a lot of growth at BrainStorm (along with more new faces around the building).

Of course, growth and change are good.

As Bryant says, “BrainStorm is a growing company, such that it’s hard to keep up with fellow employees’ names. I wanted to create an app that addressed this challenge in a fun way.”

Thanks to his engineering mind, Bryant was ready to get going even with no formal coding skills. Plus, BrainStorm’s QuickHelp™ platform helped fill in any Office 365-knowledge gaps.

Everything was in place for Bryant’s *Who’s on the BrainStorm Bus? App.
*A play on words based on the writings of Jim Collins. 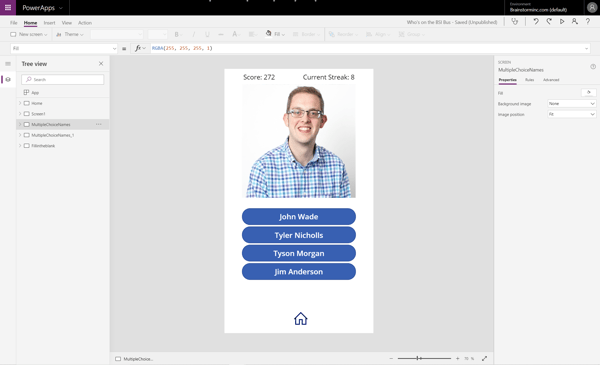 Bryant’s Who’s on the BrainStorm Bus? app, shown in edit mode within PowerApps

Making an app is like any new venture; it happens through trial and error.

Bryant had a vision for his app. But like other budding developers, he didn’t know what he didn’t know. Which tools did he need when?

Case in point: Whenever Bryant got stuck, he searched for answers online, took advantage of BrainStorm’s QuickHelp platform, and reached out to other professionals or Power Platform experts on social media.

During app creation, here’s where Bryant spent his time: 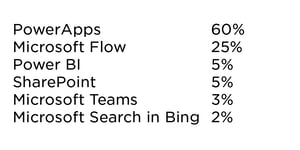 In the end, it took Bryant about 15 hours to create his app with PowerApps. If he were to rebuild it today, he estimates he’d have it up and running in 4 hours.

Who’s On the BrainStorm Bus?

“Essentially, my app is a face/name-matching exercise that helps team members get to know their colleagues better.” – Bryant Boyer 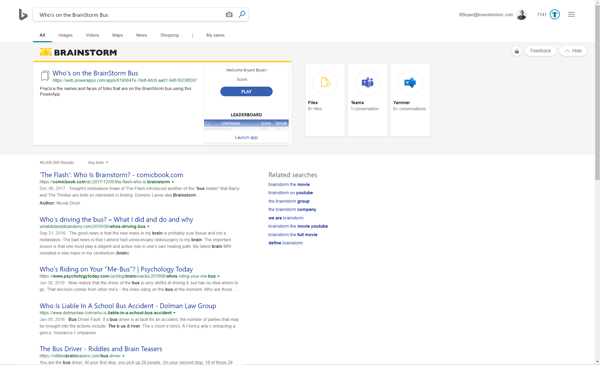 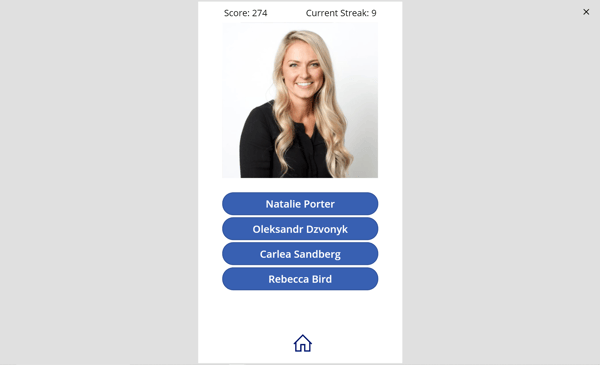 (Red indicates an incorrect answer, as shown below.) 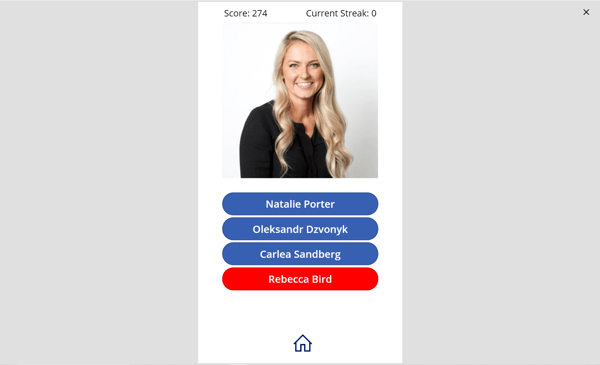 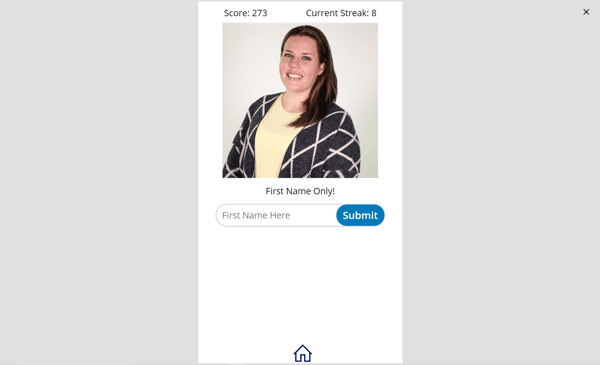 (Green indicates a correct response, as shown below.) 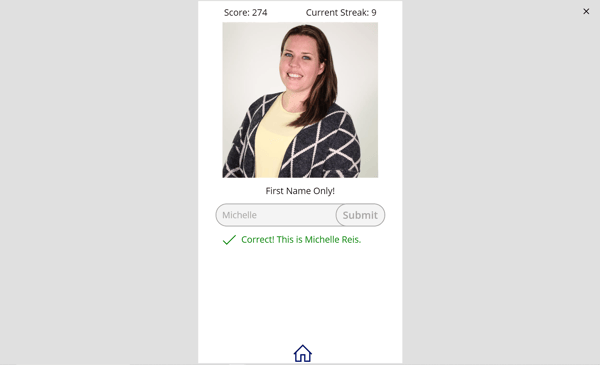 (A leaderboard indicates the score and winning streak for each player, as shown below.)

Reactions from the BrainStorm team

Once Bryant introduced Who’s on the BrainStorm Bus?, things heated up at BrainStorm headquarters.

For instance: two interns used the app late at night and well into the morning, fighting for the top spot on the leaderboard.

The company’s Yammer channels soon lit up as word spread about the game.

“I love this, Bryant! We have been talking about doing something like this for several years. Thank you for seeing the need and running after it.”

To date, over half of BrainStorm’s employees (upwards of 51%) have engaged with Bryant’s app.

Additionally,70% of app users without an Office 365 profile picture uploaded one.

And it all happened because an enthusiastic citizen developer saw a need, leveraged his Microsoft tools in a powerful way, and created his own solution.

Just imagine what your organization could do.

Struggling to adopt Office 365 at your organization? BrainStorm’s QuickHelp can help you think bigger and work smarter—in a lot less time.

Microsoft Teams Essential Habits for Getting Back to the Office